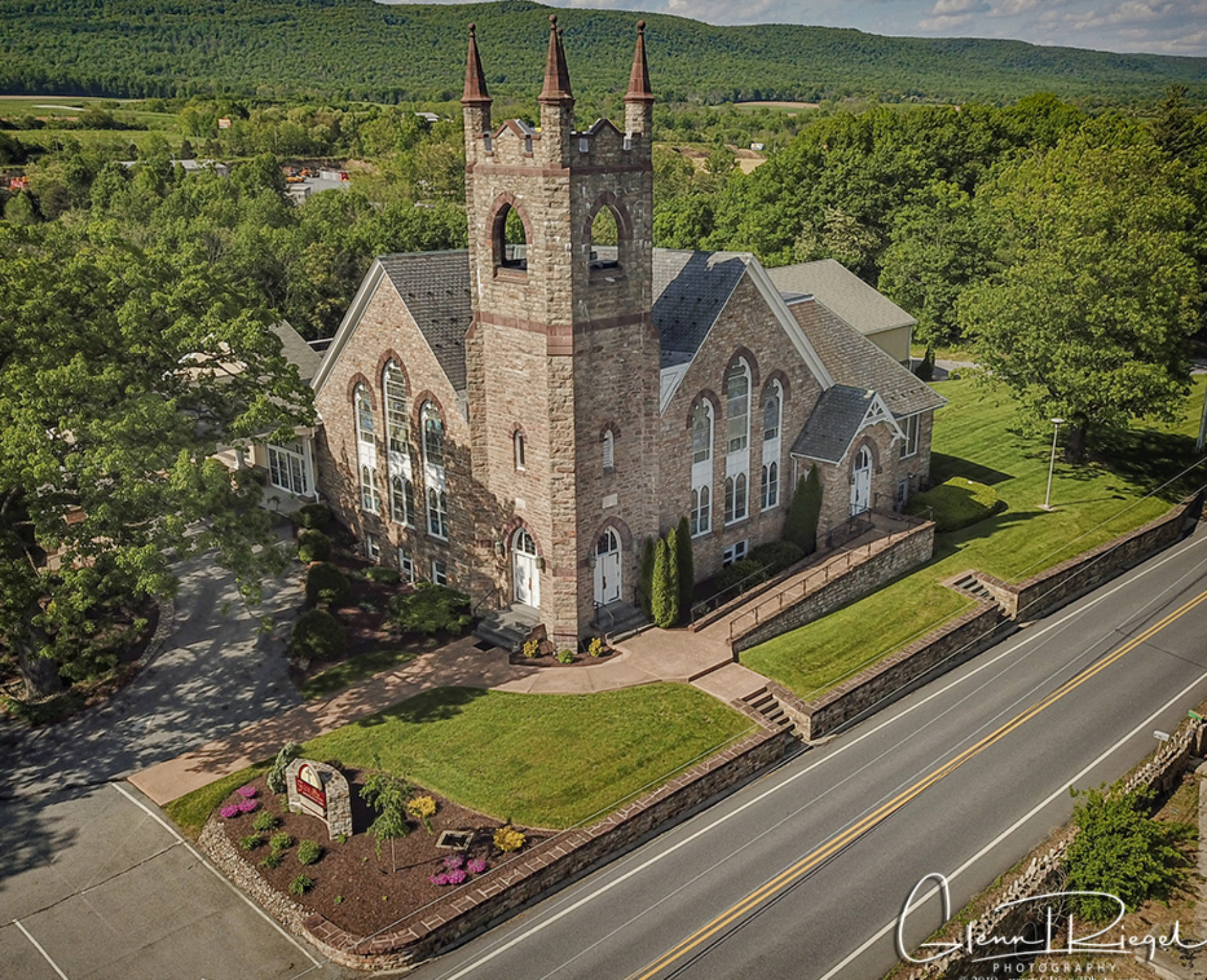 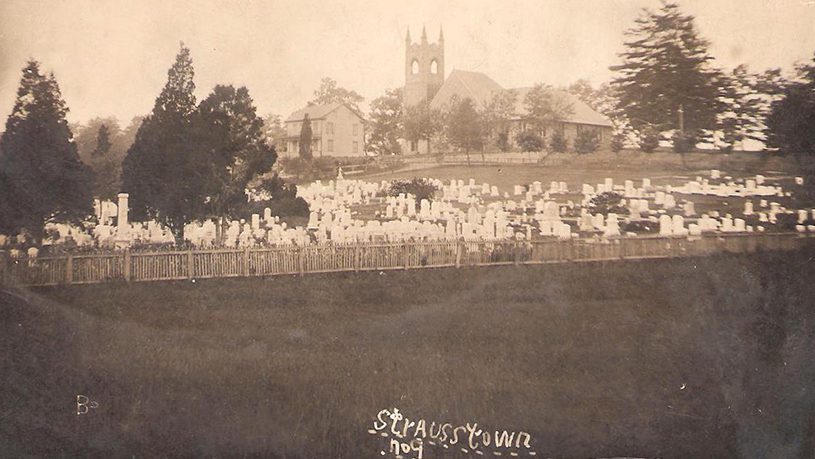 Just east of Strausstown in northwestern Berks County, the four-square bell tower of Zion Blue Mountain United Church of Christ, silhouetted against the mountain that gave the church its name, has been a landmark for over a century. Interestingly, the dedication of the church building in 1905 was just one important chapter in the history of our congregation, which was established in 1739 on the northern frontier of Pennsylvania in what was then Tulpehocken Township (now Upper Tulpehocken Township) part of Lancaster County (until Berks County was formed in 1752). For more than 275 years, our congregation has faithfully served our community and the surrounding area.

By 1739, seventeen families had claimed land in the upper reaches of Tulpehocken Township along the base of the Blue Mountain, where the Lenape had hunted only a few years earlier, and other German settlers undoubtedly had begun establishing farms there without going through the legal process. That year these few families eagerly established a Christian congregation of German Reformed and Lutheran believers. At that time, there was a single German Reformed pastor, John Philip Boehm, serving all frontier congregations west of the Schuylkill River. Although, he is considered the spiritual founder of Zion Blue Mountain, no record of his visits survive. 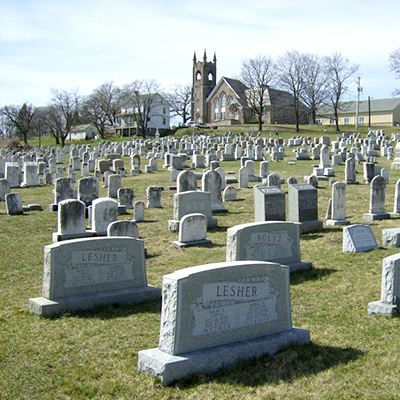 The first Zion Blue Mountain church was a log cabin built in 1739 of basic design with no attempt at architectural refinement. Rows of benches filled the interior and, according to tradition, despite the absence of a stove for warmth, services lasted at least two hours, with the pastor “lining out” the hymns. Services were usually held monthly, sometimes quarterly, as weather allowed.

The first recorded baptism at Zion was December 14, 1743, when John Dondor and his wife, Margaret, presented their daughter. Three years later Adam Sontag (Sunday), Valentine Rientzel (Reinsell) and Jacob Resh obtained a warrant for fifty acres of land where the church was located, “in trust of the Reformed and Lutheran Congregation.”

During the French and Indian War in the mid 1750s, Daniel Schumacher, an independent Lutheran pastor, as well as an accomplished fraktur artist, rode his horse through the area of conflict to minister to the congregations along the Blue Mountain, leading worship at Zion and nearby Fort Northkill. The first full-time pastor at Zion Blue Mountain was Ludwig (Lewis) Lupp who had arrived in Philadelphia from Germany in 1753 and came to the Upper Tulpehocken area a year later. He began as a schoolmaster for the Reformed Church shortly before the first Lenape attack south of the Blue Mountain and assumed pastoral duties in 1766.

The log cabin church served the Zion Congregation until 1819 when a large stone edifice was erected on the site of the present building. It was quite elaborate, especially in contrast with its predecessor. It contained carved paneling, a gallery on three sides of the sanctuary, and two barrel stoves for heating. This second home of the Zion Blue Mountain congregation must have seemed luxurious indeed with its pipe organ and beautifully proportioned “wineglass pulpit.” It continued in regular use with such additions as a slate roof and a new steeple for eighty-five years, being shared by the German Reformed and German Lutheran congregations. For many years the two congregations maintained a parochial school for which they elected and paid a teacher, since public education was not enacted until 1855. The noon-time ringing of the church bell was a tradition which was carried on into the next century and served to emphasize the interdependence of the church and the community.

As time went by, the 1819 church on the hill above Strausstown became somewhat dilapidated because of the onslaught of the elements in such an exposed location. Lightening struck the steeple on several occasions, and in 1898 the two congregations began talking about replacing the old building. Although some controversy occurred, the decision to build a new structure on the same site was finally reached and put into effect in March of 1904. The new church was a joint venture of the Reformed and Lutheran congregations and Zion Union Sunday School. Stone from the Blue Mountain was employed as the primary building material, and members of the congregation carried out the construction themselves to save money. The church building was dedicated May 20-21, 1905. The cost was $7,000. The mortgage was burned in October, 1915. 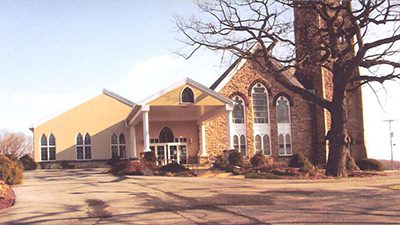 Over the years the church building has undergone many renovations and changes. Basement rooms were excavated (largely by hand) in the 1930’s, indoor plumbing was added, the balcony removed, and pews were rearranged to allow for a center aisle. Comforts such as an oil-fired central heating system and upholstered pews have been installed, and a new addition to the building includes a large social hall, largely funded by a generous donation from Ernest E. Althouse to establish the Adam J. and Minnie M. Althouse Memorial Fund. One wonders what the reaction of our log cabin ancestors would be! A fundamental change which did not involve the physical plant was the consolidation of the remaining Lutheran congregation into Zion Blue Mountain United Church of Christ (formerly the Reformed congregation) in 1972 into the present UCC congregation. A total of 18 Lutheran pastors and 25 Reformed and UCC pastors have served our congregation. The longest pastorate was the 44 years of the Reverend Frank Ruth, a Reformed pastor who also represented the area as a state senator from 1935-1959.

Our customs and priorities have changed during the last 278 years, but our church remains an integral part of our community. Its people continue to be actively engaged in Christian living and service to the people of Northern Berks County.